One man put everything into perspective, PERFECTLY, detailing the what's what of the Nunes memo and how it impacts the nation on the whole.

This is how the Nunes memo is the beginning of the end.

Jason: Been thinking the same since I turned on the television - I'm going to piggyback on @MZHemingway's truth and share some thoughts on the memo, specifically as it relates to the presentation of info in the Steele dossier to obtain the warrant on Carter Page.

First, recall that James Clapper, as DNI, oversaw the compilation of intelligence by CIA, NSA, and FBI to produced the Intelligence Community Assessment on Russian interference in the election. Their work began in December 2016, and the report was released on January 6, 2017.

Clapper has been interviewed countless times on his understanding of the degree to which the Steele dossier contributed to the opening of the FBI investigation, and, significantly, whether any of the info in the dossier had been corroborated.

Clapper admittedly had and has no idea what role the dossier played in opening the investigation, because he didn't learn of the FBI investigation until March 2016, two months after he left office. So he can't help answer that question.

The question he CAN answer, and which he has answered repeatedly in scores of televised interviews, is how much of the Steele dossier had been corroborated by the time he left office in January 2017. Clapper says he learned of, and read, the Steele dossier in December...

...when he was working with the IC to put together his ICA. When asked whether any information from the Steele dossier informed the ICA, Clapper consistently gives the same answer, almost verbatim. He says they didn't have time to validate the second and third level sources..

...in the dossier, so they didn't include that information in the ICA. When questioned further about his knowledge of ANYTHING in the dossier that had been validated prior to his departure in January 2017, he repeatedly cites 2 items: Putin hated Hillary; and wanted Trump to win.

Now apply Clapper's characterization of the status of FBI/IC vetting of the Steele dossier to the timing of the Carter Page FISA application. Clapper tells us the IC had only validated 2 lines in the dossier - neither of which have anything to do with Page, as of December 2016.

The FBI presented information from the Steele dossier related to Page in October 2016, two months before telling Clapper they couldn't use that info in the ICA because they hadn't had time to vet the sources.

So, according to the former Director of National Intelligence, none of the Page allegations in the dossier had been validated by the FBI when they were presented to the FISA court as probable cause to designate Carter Page an "agent of a foreign power." It was raw and unevaluated.

This is the threshold the FBI/DoJ has to meet to designate an American citizen an "agent of a foreign power" for the purposes of obtaining a warrant to monitor his communications: 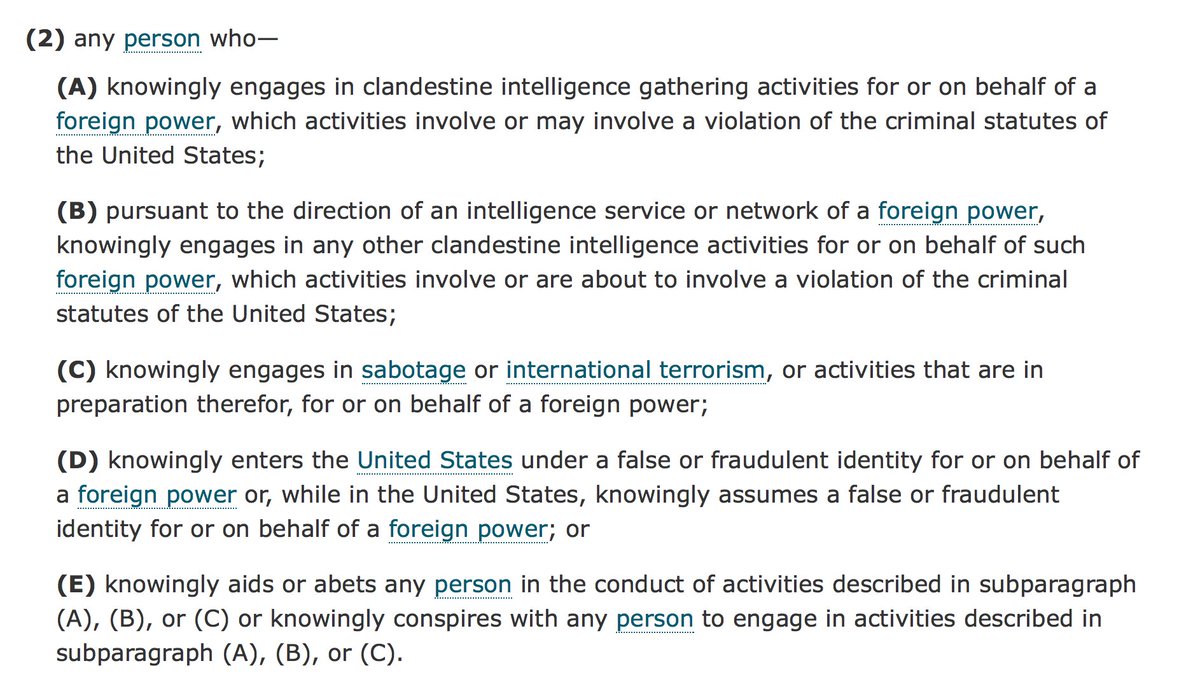 Remember - the only part of the dossier corroborated by December 2016 was Putin's hate of Clinton, and his desire for Trump to win. Yet the FBI successfully convinced the FISA court, using uncorroborated info in that very dossier, that Page was an agent of a foreign power.

I've been watching every pundit and panel member within shouting distance of a microphone telling us how insignificant and spurious the Nunes memo is - how it's all smoke to protect Trump.

I've also watched over the last couple weeks as FISA expert after FISA expert guaranteed us all that the FBI and DoJ would never/couldn't possibly present raw, uncorroborated intelligence to the FISA judge - it's unheard of, they say. Laughable. It would be shot down immediately.

The Nunes memo shows that they did. They did present raw, uncorroborated intelligence, they weren't laughed at, and they weren't shot down. They got the warrant, and @comey, @AdamSchiffCA, @jimsciutto and scores of their colleagues are telling us there's nothing to see here.