Was John McCain Involved In The Infamous “Trump Dossier” ? 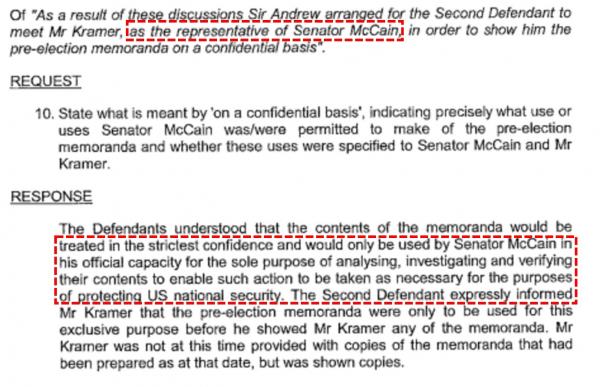 After BuzzFeed’s release of the “now-infamous Trump Dossier”, many have been speculating as to who paid for “dirt” on the Trump administration as well as who exactly had the chance, the opportunity, to get a peak at it before being passed off to the FBI. And it seems, now, there’s speculation toward Senator John McCain as the name continues to “pop up” each time the dossier is mentioned.

As written for ZeroHedge.com by Tyler Durden:

That said, a name that continues to pop up every time the dossier is mentioned is that of Senator John McCain (R-AZ), a rather outspoken and unapologetic critic of President Trump.

As a recap, for those who have manged to avoid the head trauma of this particular narrative, the dossier in question was compiled by former British spy Christopher Steele and his London firm, Orbis Business Intelligence Ltd.  The intelligence produced amounted to a collection of uncorroborated reports gathered by Steele primarily from intelligence contacts he developed while working undercover in Moscow.  Provocative details relating to Trump, hookers and ‘golden showers’ in Russian hotel rooms proved explosive when they were published by BuzzFeed on January 10th, but were quickly debunked as nothing more than ‘fake news.’

But now, courtesy of a lawsuit filed by Aleksej Gubarev in the U.K., additional details are emerging which raise new questions about McCain’s links to the dossier.  As McClatchy notes today, according to a new court document filed in the British lawsuit, the counsel for Chris Steele repeatedly points to Senator McCain and a former State Department official as two of just a handful of people known to have had copies of the full document before it circulated among journalists and was ultimately published by BuzzFeed.