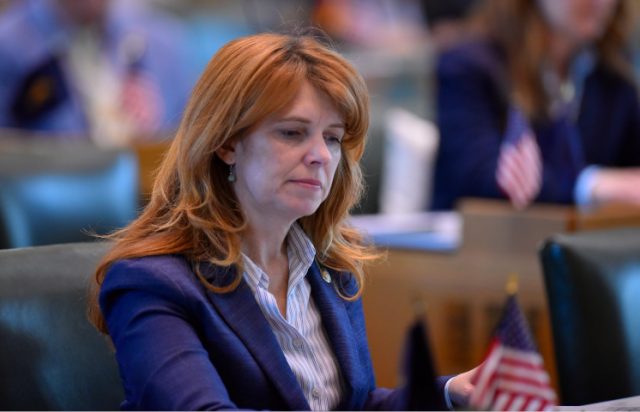 During a debate on Wednesday night, Christine Drazan, the Republican candidate for governor of Oregon, criticized her Democratic opponent, Tina Kotek, for her apparent lack of support for police enforcement.

Kotek responded “yes” when asked if additional police officers were required in response to a query about how to fill open positions.

Kotek emphasized the need for a timely and effective response to 911 calls. We need additional police officers; that much is certain. The government can help by providing more opportunities for education and development. Our state police force has always had my full backing. Maintaining a strong state police force, especially in rural areas, is crucial.

We need a variety of responses, she added.

In rebuttal, Drazan said, “Tina Kotek is the original defund-the-police candidate. Even when protesters were storming a police station, she did not back the police. I can’t believe she’s now pretending to be on the side of police enforcement with these statements.

Drazan stated, “As governor, I would completely finance the state police.” We need law enforcement, and if elected governor, I will back them. Fewer police officers mean less protection for our neighborhoods.

A candidate with no party affiliation, Betsy Johnson, agreed with Drazan, stating, “I will join Ms. Drazan in saying I’m startled by Tina’s statement because we’ve got to start with respecting our police.”

That doesn’t mean you should have joined the rioters or criticized the police when they were on the streets. Tina sided with the rioters in a letter she addressed to [Democratic Portland Mayor] Ted Wheeler. In passing, she said that Ted had joined the rioters.

Drazan’s team expanded on the Republican candidate’s claim in an email to supporters, noting that Kotek had tweeted that police “continued to intensify uncomfortable situations” amid disturbances she described as “huge, non-violent demonstrations.” According to the campaign, “[Kotek] also made disparaging comments regarding rioting and vandalism, claiming: ‘What needed to be safeguarded last night?'” The question, “An empty office building?'”

Kotek tweeted about police officers whom she said were “physically intimidating” journalists.

According to Drazan’s campaign, Kotek “welcomed the endorsements of NARAL, which publicly advocated defunding the police, as well as AFT-Oregon, who published — and have since removed” a social media post in favor of abolishing police forces.

John Burke, Drazan’s director of communications, said, “Tina Kotek is the original defund the police candidate; she may attempt to distort her past, but every Oregonian knows the reality.” She might have joined the riots or the people who kept us secure. She opted for the rioters. The people of Oregon do not have faith in her to ensure the safety of our communities or to back up our police.