During the contentious oral arguments, the justices acknowledged the thorny issues of striking a balance between free expression and anti-discrimination 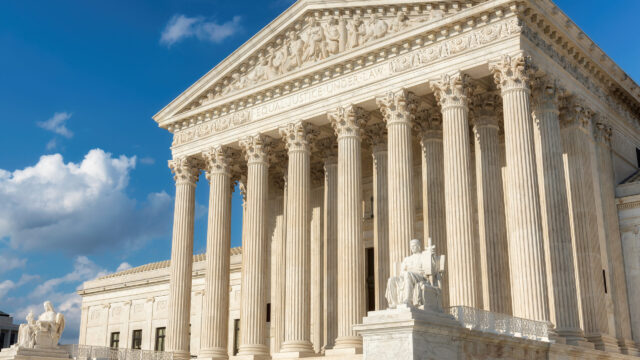 The justices’ hypotheticals demonstrated the difficulty of the matter.

Last week, the Supreme Court heard oral arguments in a case brought by a Colorado graphic designer challenging a state anti-discrimination legislation because she wants to offer wedding website services but not for same-sex weddings.

Justices put out several hypotheticals, some with more apparent conclusions than others, to determine where the line should be drawn between free speech and discrimination.

In a lawsuit against the state of Colorado, 303 Creative LLC owner Lorie Smith claims that while she has no problem working with customers from the LGBTQ community in general, she will not produce work for a homosexual wedding due to her moral convictions.

Justice Amy Coney Barrett requested Smith to establish a website detailing the relationship of a couple who met during an extramarital affair.

Her lawyer, Kristen Waggoner, added, “I don’t believe she would.”

Some other potential scenarios were murkier.

Ketanji Brown, a Justice Jackson, wanted to know whether there was a circumstance like the one described, in which a Christmas photo studio was replicating old-time images and, to be true to the era, they only permitted white children to participate. In this scenario, the firm catered to Black customers for family portraits and referred them to other suppliers for other sorts of photography if they so chose. Jackson questioned whether, according to Smith’s reasoning, this was permissible, given that requiring the photographer to accept Black clients would alter the photographer’s vision and compel them to produce something they did not want to make.

Waggoner didn’t seem to know the answer, but she insisted it wasn’t necessary.

She claimed that her client’s situation was plain and dried from the hypothetical she had just described, saying, “That may be an edge case, but this is not.”

Justice Elena Kagan posed a series of hypothetical questions to the two parties. Waggoner was questioned about a hypothetical in which a heterosexual couple hires Smith to create a wedding website. Then a homosexual couple views the site and requests the same thing. Kagan argued that Smith wouldn’t have to come up with anything original.

Waggoner argued that this would still be an issue since words used in one context might signify something entirely different in the other. When Kagan questioned this, she asked Smith what kind of speech she planned to give at the homosexual wedding. Smith’s attorney, the Waggoner, said that her client finds same-sex marriages contrary to the Bible and that Smith’s comments would proclaim a marriage with which she strongly disagrees.

Kagan presented another hypothetical case that even she had problems coping with when it came time for Colorado Solicitor General Eric Olson to give his argument.

If Smith had her way, Olson said, any company offering expressive services “may reject services to particular clients because of their handicap, sexual orientation, religion, or race.” Kagan’s questions stump him, too, despite his position.

Kagan imagines a gay couple requesting a conventional website with the addition of the words “God blesses this union” on the homepage. Smith would respond she can’t do it in the hypothetical situation, but the homosexual pair would counter that she would do it for a straight couple.

Kagan responded, “I think that is different,” because while much of the material on a wedding website is provided by the couple, including that sentence may be seen as the view of a third party, notably the designer who developed the site.

Olson said, “It can get a bit difficult.” He continued, calling her scenario an “edge situation” but stressing that he would maintain his original stance whatever.

It wasn’t only Justice Neil Gorsuch who gave Olson pause. He offered a scenario in which a freelance writer would compose PR materials for anybody, regardless of whether or not they agreed with the messages’ religious overtones. Olson said “no” when asked if the legislation in Colorado would force the writer to do anything the client desired.

Gorsuch continued by noting that Smith claims she would help everyone, with one exception: if doing so would contradict her values. When asked to differentiate between the hypothetical and the issue before the Court, Olson brought up the relief Smith is seeking as the critical distinction. Since redress is ultimately up to the courts, Gorsuch disregarded that argument.

What exactly qualifies as verbal communication was another point of contention. Justices Jackson, Barrett, and Sonia Sotomayor investigated the technological issues of developing a website.

According to Jackson, a website catering to gay and heterosexual couples may provide identical information. Sotomayor stated that a wedding website is the couple’s speech, not the web designer’s, in their married announcement.

“Why am I being invited by you?” she questioned. “Don’t bother asking them to the wedding.”

Waggoner retorted that it’s the same as when someone else’s name appears on a piece of writing, but they’re the ones who did the actual writing.

“How is it your story?” she questioned. Their narrative is the one being told here.

According to Waggoner, authors often retell the experiences of others, but their words remain in the final product.

Barrett wondered if there would be a problem if Smith premade a “plug and play” website for everyone who wanted one, complete with preloaded stock photos and prewritten code. The judge wanted to know if that was considered free speech.

Waggoner understood this was not the same as developing new websites since the premade package would already be “in the stream of commerce” and hence not protected.

In light of this, Barrett inquired as to whether or not it would be OK for a homosexual couple to request using work already completed by Smith. Because a homosexual pair wouldn’t want to use a site with the names and photographs of a guy and a woman, Waggoner said this wouldn’t happen.

She explained that her work is always made to order, and her decisions are solely based on the message rather than the requester. After the arguments ended, Smith said, “There are some messages I can’t create regardless of who requests them.” And Colorado is attempting to compel me to produce original artwork advocating for causes that run counter to my religious beliefs and the values I hold dear.