Those who disagree with Mayorkas’ deportation order will have the chance to present their cases before the Supreme Court. 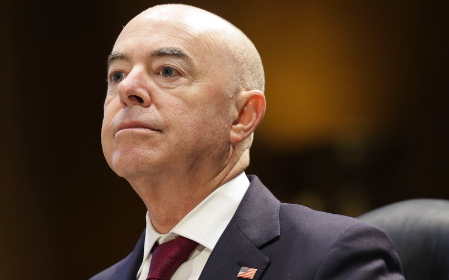 It has been claimed that former DHS secretary Alejandro Mayorkas tried to get ICE to halt the deportation of millions of illegal immigrants.

Texas AG Ken Paxton and Louisiana AG Jeff Landry, Republicans, will argue before the Supreme Court today that DHS’s holding of illegal immigrants in indefinite custody without due process violates the law.

Allegations in the case include a felony committed by Homeland Security Secretary Alejandro Mayorkas when he approved a document limiting ICE’s power to deport illegal immigrants.

DHS lacks “the capacity to arrest and seek the deportation of all of these noncitizens,” Mayorkas said in a September 2021 paper for ICE and other related agencies. The number of “unlawful or otherwise removable noncitizens in the United States” is much lower than the “more than 11 million” he anticipated. When choosing whether immigrants should be given more priority, they were instructed to “use your best judgment.”

The “vast majority of unlawful noncitizens who could be subject to deportation have been contributing members of our communities for years,” Mayorkas said in a memo. Some of these people “battle the frontlines against COVID,” as one writer put it; others “lead our religious groups,” “educate our children,” or “perform backbreaking farm work” to provide food to the table.

That someone is a removable noncitizen, he argued, “should not alone be grounds for an enforcement action against them.” We’ll be more methodical about where we put our enforcement energy.

The lawsuits filed by Texas and Louisiana claim that ICE violated the law by ignoring an internal letter ordering the agency to detain “serious criminal illegal immigrants.” The states contend that DHS, as an executive branch agency, must obey congressional mandates and “disregard legislative directives.” Another accusation made by the state is that DHS has revoked “detainers,” indicating that it no longer intends to take possession of formerly incarcerated persons for deportation.

“many criminal aliens with revoked detainers had reoffended, failed to comply with state parole regulations, or were gone,” a federal district court ruled in January 2018. Since the states “bear costs related to law enforcement, recidivism, healthcare, and education that are traceable to the Final Memorandum,” the court ruled that they had the standing to sue and that the DHS memo was illegal and procedurally unlawful since it constituted a policy that did not go through formal notice-and-comment procedures.

Federal District Court Judge Drew Tipton called DHS’s letter “an unreasonable vision of federal law that flies in the face of the restrictions imposed by Congress.”

After the states prevailed in federal district court, the Biden administration urged the court of appeals to temporarily put the matter on hold. The Supreme Court yesterday rejected a similar request from the government and set today for oral arguments on the merits.

The Attorney General of Texas, Ken Paxton, commented on the court’s decision to reject the Biden administration’s appeal, saying, “The Biden administration just can’t help itself from breaching the law, especially immigration law.” Their requests for amnesty have been denied by every court, from the trial level to the Supreme Court.

Moreover, “the Supreme Court made plain that as we prepare for oral argument this winter, the Biden administration must hold illegal aliens with criminal records,” he added.

For the states’ purposes, it would be OK to win this appeal against the Biden administration.