I wonder if the NYT was paid by the DNC for the commercial they ran for them, accusing President Trump of refusing to act on the DTMNBN (Disease That Must Not Be Named) crises early enough.

The fact-checkers at Breitbart News ruled the story mostly false. The article begins with an email from January 28th, a day after Trump created his DTMNBN task force, the day before the first meeting of the task force and three days before he banned travel from China.

Dr. Anthony Fauci who said on Sunday that lives could have been saved had President Trump acted sooner.

But on January 21st, Fauci wrote that although DTMNBN was serious, it posed no great danger to the American people. Fauci should be fired.

So, if Fauci did not think it was serious threat on the 21st of January, that would mean that Trump was taking it seriously less than a week after Fauci downplayed the danger.

So, where was the delay?

I yield to no one in admiration of Dr. Fauci. But this comment from January 21 should be kept in mind by those accusing anyone in the U.S. of failing to act in time against Covid 19. Watch it all the way through: 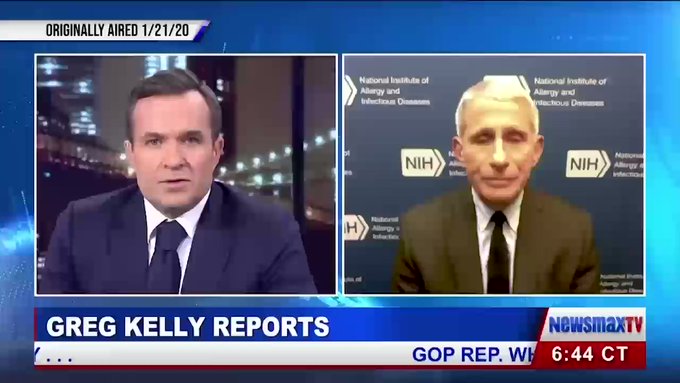 15.7K people are talking about this

The Times faults Trump for considering the effect of public health measures on the economy: “Even after Mr. Trump took his first concrete action at the end of January — limiting travel from China — public health often had to compete with economic and political considerations in internal debates.” But it is not clear how else Trump was to manage a threat whose impact was uncertain — and where many of the policy interventions he would have undertaken would have definite economic costs.

The Times also falsely assigns blame to the president for the failure of the test initially approved by the Centers for Disease Control and Prevention (CDC). It claims “the administration had botched the rollout of testing,” but in fact it was a problem that had nothing to do with Trump or his administration. As Dr. Fauci later said, the failure of the initial wave of tests had been no one’s “fault” in particular, but the result of an ordinary technical “glitch,” and “certainly not the president’s fault.”

Amazingly, the Times acknowledges that impeachment might have constrained Trump’s ability to act. But the newspaper accepts no responsibility for its own role — or that of the media, or the opposition — in supporting the impeachment trial.

Nor does the Times account for its own early, mistaken reporting on the DTMNBN outbreak– such as an article in early January that declared in the sub-headline that a new illness in China “doesn’t appear to be readily spread by humans.”