Federal authorities have discovered a tunnel that runs from Mexico into Arizona that has a rail system and is wired electrical for more efficient smuggling for drugs and possibly used for sex and human trafficking as well. The tunnel also has running water, a sophisticated ventilation system and extensive reinforcement.

With the wall going up and other measures the Trump administration has taken, drug dealers and human traffickers have to become more inventive at least until the US has another Democratic president. With the then open borders, they probably won't be challenged in their criminal pursuits. The tunnel is three feet wide and four feet high.

From The Daily Caller

The Trump administration announced a ban on all unessential travel at the U.S. northern and southern borders in March. Canada and Mexico’s borders also banned non-essential travel in March, Secretary of State Mike Pompeo and Acting Secretary of Homeland Security Chad Wolf said. The ban was extended in June, the Mexican government declared.

Arrests dropped in April to some of the lowest levels on the U.S.-Mexico border after the president tightened restrictions on border crossing, according to Customs and Border Protection (CBP).

99.8% of all drugs brought to the United States are smuggled in through Mexico. Since 2012, 8.2 million pounds of drugs including heroin and fentanyl have been smuggled in across our southern border. 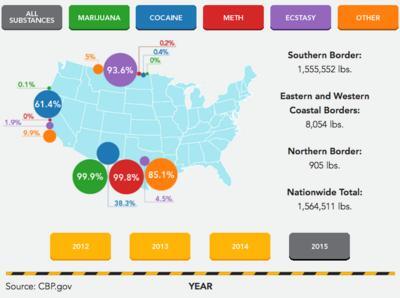 According to the DrugAbuse.com report:

Increased drug trafficking in the U.S. has led to an epidemic level of overdoses, surpassing car accidents and firearms as the leading cause of injury and death among Americans. Drug abuse is ending too many lives, too soon.

According to data from the DEA, the number of drug overdoses has climbed more than 50% in the last decade. Death and injury can be traced back to drug-related violence, overdoses from illicit drug use, accidental deaths as a result of drug abuse and injury or death related to smuggling.