Rep Steve King not only said that Obama whistleblower Philip Haney did not kill himself but that he left a life insurance policy behind in case anything happened to him. I'm not going to dredge up a bunch of conspiracy theories but I have noticed that while many whistleblowers against the Democrats end up dead, not one of the whistleblowers against Republicans have. Coincidence? You decide.

Philip Haney is the man that exposed Barack Obama's hiring of Islamic hardliners and the fact that Haney was told to cover up that information. haney was to be married within a month. It's unusual for someone to kill themselves before marriage. After marriage, sure. Just not before.

Phil Haney was a friend & patriot. He was a target because of all he knew of Islamic terrorist coverups. He insured his life by archiving data that incriminated the highest levels of the Obama administration. Phil Haney didn’t kill himself. RIP, Phil. https://t.co/pvy7MflFwc

I am devastated to hear my dear friend Phil Haney has passed. I was texting with him on Wednesday and he had just returned from his sisters and was praising God for a breakthrough! I had prayed with him on Tuesday.

From The Gateway Pundit

According to a statement by the Amador County Sheriff-Coroner’s Office released Saturday afternoon, Haney’s body was found with a gunshot wound Friday morning by his car on a highway in Plymouth, California. A firearm was reported found next to Haney.

On February 21, 2020 at approximately 1012 hours, deputies and detectives responded to the area of Highway 124 and Highway 16 in Plymouth to the report of a male subject on the ground with a gunshot wound. Upon their arrival, they located and identified 66 year old Philip Haney, who was deceased and appeared to have suffered a single, self-inflicted gunshot wound. A firearm was located next to Haney and his vehicle. This investigation is active and ongoing. No further details will be released at this time. 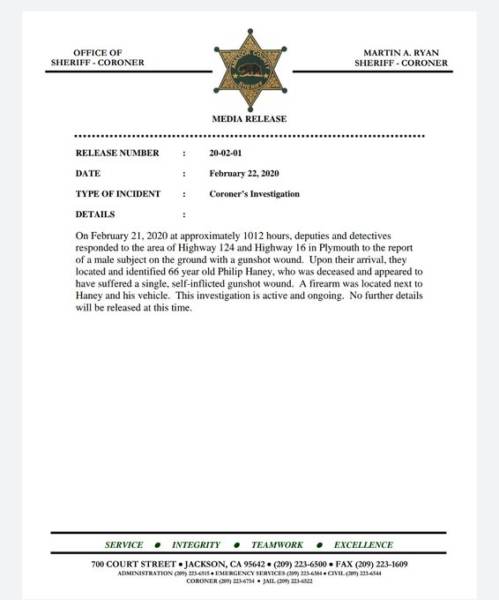